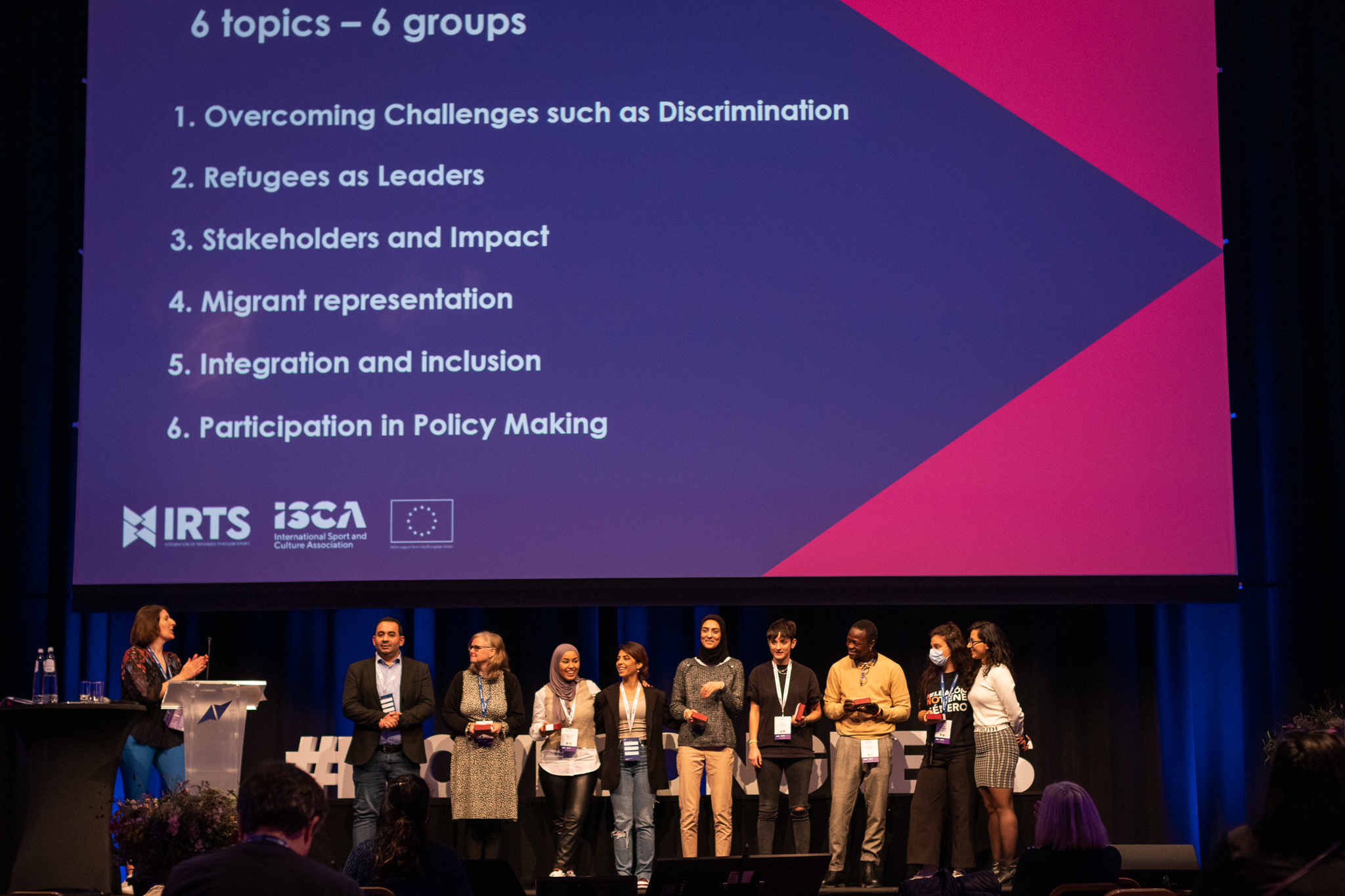 “Let’s share the light”: Refugee-led workshop prompts rethink of how to design projects with refugees

Migration expert Adnan Abdul Ghani from Save the Children in Sweden started the MOVE Congress 2021 workshop ‘Reconnect: Collaborate by networking and including refugees’ by sharing his story of starting a movement as an asylum seeker to highlight the skills asylum seekers and refugees can contribute to their new communities. His keynote, followed by a vignette of the refugee’s experience from Girl Power founder Khalida Popal, set the scene for a workshop led entirely by former refugees and migrants who are now leaders in sport and physical activity. But, as he pointed out, this approach is strangely the exception when it comes to discussing refugee integration at most project meetings and events. 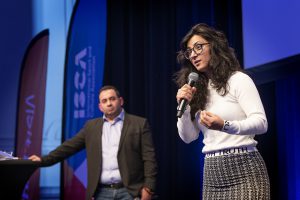 This is a pattern Khalida Popal has also noticed through her work with her NGO Girl Power.

“Unfortunately with activities designed for refugees, most of the time refugees were not involved in designing those activities,” she noted. “Their voices were not there, and most of the time those activities were based on our thinking of, for example, what a European woman thinks or how they live based on their culture and experiences. So when they come with those kinds of activities the [refugee] women do not feel included and feel like ‘it’s not for us’.”

As part of ISCA’s Integration of Refugees Through Sport project, ISCA project coordinator Monika Resetar co-designed the workshop with Popal and Abdul Ghani to invite young refugee leaders to facilitate six discussion groups on different aspects of refugees’ experiences in sport and physical activity – from being participants at a local level to being representatives and advocates at a national or international level. The Head of the EU Sport Unit, Floor Van Houdt, also joined the workshop and presented the EU’s future plans for this field of work at the end of the session. 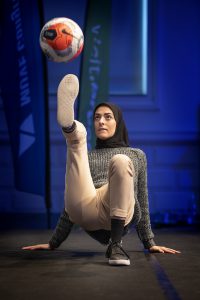 Freestyle footballer Maymi Asgari showcased the football tricks that have made her a star on TikTok before introducing her breakout group ‘Overcoming challenges such as discrimination’ by touching on her own experience of overcoming discrimination through sport.

“It wasn’t easy being a hijab woman playing football in a country like Denmark, so the thing I do today is I’m a TikTok influencer with about 140,000 followers and I’m on Instagram too. I try to post videos to overcome different types of discrimination I face. I try to make it easier for the next generation so they don’t face the same thing as I and my friends did.”

Shabnam Ruhin and Sara Akbulut from Girl Power in Hamburg drew on their experience of mentoring refugee girls and young women in their ‘Leadership and empowerment’ discussion group.

ISCA Award winner Gerald Mballe, who won the Role Model in Integration of Refugees Through Sport award on Wednesday evening, led the ‘Stakeholders and impact’ group from his perspective as a refugee advisor to the Special Olympics. He referred to Abdul Ghani’s keynote message that by recognising the strength and capabilities of refugees and seeing them as potential partners rather than “victims” or “charity cases” by highlighting his own journey and impact in sport. 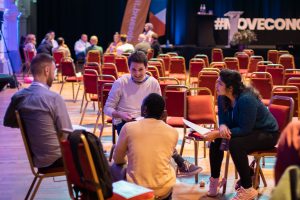 “I was not a victim, even though I arrived [in Italy] as a victim. I would say I’m a survivor and today I’ve realised that I am a winner.”

Another ISCA Award winner, Fútbol Más from France, took to the stage again as its Educational Officer Zina Mameri introduced the discussion group on ‘Integration and inclusion’. Originally from Algeria, Mameri started her introduction in a combination of three languages without warning – French, Arabic and Tamazight – to emphasise how confusing and challenging it can be for refugees and migrants to settle into a new community and local language: “The [confused] faces I see [in the audience] are the faces I see every day.” 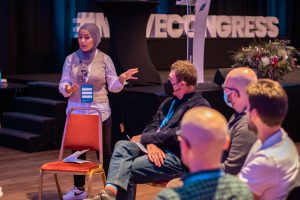 Nagin Ravand returned to the stage after her strong contribution to the plenary panel. At only 22, Ravand is a #BeActive Local Hero nominee and has worked on programmes for the Danish Olympic Committee and Sports Confederation (DIF). Identifying herself as Iranian, Afghan and Danish, Ravand led the group on ‘Migrant representation in sport’, underlining how important positive and impactful role models are for the future of refugees and migrants.

“The next generations need someone to look up to. They need someone who fought the battles and made it a little bit easier day-by-day until they find out that there are no battles.”

Adnan Abdul Ghani, who is also a member of the European Commission’s Expert Group on migration, asylum and integration, shared his expertise in the breakout group ‘Participation in policy making’.

What is inclusion? What is integration?
When Ghani shared his own story at the beginning of the workshop, he explained that what motivated him to proactively advocate the professional skills and potential of asylum seekers and refugees was seeing an academic and a Syrian sporting hero become “broken men” by losing hope at the asylum centre.

“It took them only six months to reach that stage in the refugee camp. Was I going to be like that in six months? No. [I thought] we have to do something; we have to change,” Abdul Ghani said, adding that he encouraged these men to rediscover the strength to “Use what you are good at and reclaim your self-esteem.” 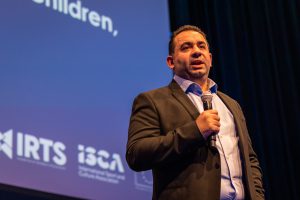 “[So] we defined our own understanding of integration. We created an organisation led by refugees and we called it the Support Group Network. That means if you have an initiative we’ll come together around you and support your initiative. And we’ll start initiatives for the society around us – collaborating as equal partners, not as charity cases. Our own understanding is that integration is participation.”

Both Abdul Ghani and Popal urged the MOVE Congress participants to rethink their refugee-themed projects and programmes with this as a guiding principle.

“I want everyone to participate and have their own light… If you want to support [refugees], let’s share the light,” Popal said. “So don’t take us, take our photos and use our stories and then say ‘sorry’ and go to another project and another project and say ‘we’re supporting refugees’. At the end of the day the refugees don’t get anything from that.”

You can catch the first part of the ‘Reconnect: Collaborate by networking and including refugees’ workshop here

<MOVE Congress 2021/>
Nothing about us without us: Why sport needs