After being one of the world’s highest profile promoters of healthy lifestyles to kids for the past 20 years, LazyTown Entertainment CEO Magnús Scheving has learned an important difference between ‘exercise’ and ‘movement’ that many adults don’t often recognise. “We don’t need to get kids to exercise,” he says. “I don’t think kids should exercise, they should do everything through a game.” The Icelander, who turned himself into a real-life cartoon superhero and international TV star, will now share his secrets to gamifying physical activity for kids in the tech age at the MOVE Congress on 18 October. As leisure trends are evolving around the world, we as physical activity promoters need to evolve, too, he says in this exclusive interview.

You’ve pointed out that you can’t preach health to kids because they’ll find it dead boring. So what is the secret to promoting physical activity to children?
Magnús Scheving: I think the secret is to turn health into a game. And I think that is the most successful thing – like something with a ball, chasing something, anything that is a game. So that kids actually play without realising that they’re moving.

What do you think about the challenge of promoting physical activity to adults?

Now that the generations are getting older, the challenge is that most of the elderly people today, they moved differently and they worked with their bodies, but they didn’t really ‘exercise’ at all. They did it at work. If you were a farmer and worked in the fields, or you did something physical, it’s strange to now be 70 years old or 80 and have to start new habits to move. With that group, you really have to motivate them to do it. But it’s going to be totally different from the next generation that’s coming up.

LazyTown was a game-changer in kids’ entertainment that took off all over the world. What made it so transferrable to different countries?
Kids want to imitate things and they want to play. They don’t really jump up and say, ‘I am a cartoon character!’ They want to be live characters. They don’t really imitate characters like Mickey Mouse, for example, but the imitate live characters like Spider-Man or Batman. But there was nothing to do with movement for kids or role models for kids in movement, except sportspeople. But that’s from when you’re 5, 6 or 7 years old – it doesn’t start earlier. And I think it’s really important to motivate kids early on to really motivate them to move. That’s why we created LazyTown in the entertainment [industry]. There was nothing in entertainment to motivate kids to move – there was nothing.

The reason why it was successful was because it was done in a certain way that the messages were a little bit hidden, and at the same time it was entertaining and it was motivational. So when the kids watched LazyTown, almost all of them stood up and moved during it and afterwards.

Kids want to do more and talk less. But grown-ups are making one mistake, and it’s that we think we have to teach kids how to move. They know how to move. We don’t need to get kids to exercise. I don’t think kids should exercise, they should do everything through a game. We just need to motivate them and give them space so they can do it. You can see around schools that they’re concrete, but maybe that’s not necessarily good for kids. Maybe they should have more contact with forests, rocks and grass – more nature.

It’s also about balance, too, and balance is a very individual thing. We’re all different, so we cannot think that everything works the same. It doesn’t. We need to have a lot of different ways to do it. I always say it takes a village to raise a child. So today this means the government, the retailers, the schools, the parents, everybody in society has to play a part to make it doable.

When kids are running around, a lot of parents say ‘sit down, be quiet’. But we should really be happy if kids want to move. We should create more situations in our everyday lives that make kids move. And I’m going to talk more about that at the MOVE Congress.

What do you see as the next game-changer for physical activity?
I think naturalism is the next thing. Everything to do with being more natural. From the food we eat, to going outside, to lifting our own body weight, to being much more conscious of our minds and bodies.

Because I saw, for example, in Iceland when I was walking the other day near the biggest waterfall in Europe, there were a lot of tourists and a lot of young people there aged 16-20. This is a waterfall next to lava, and the surface of the lava is really uneven. And they couldn’t walk. They didn’t know how to walk on the lava. They had no idea how to walk on a surface that was not even. You could see they had been walking on concrete and asphalt their whole lives. So I think this group is going to go into the nature and explore and go ‘wow, this is amazing!’

I think there is also going to be more and more extreme sports, more outdoor activities and virtual reality is of course big, and is going to become even bigger.

With the naturalism, in particular, who do you think will drive this trend? Will people discover it themselves, or will someone be the driving force?
Two things are going to drive it. It’s the architects, because they are going to decide that the more they do a Detroit type of city, the more people are going to ask for it without realising that they don’t want it. Architects can effectively kill people with the wrong design. So the architects involved in the planning of cities and houses can make a difference.

Then it’s the people themselves who are travelling more exploring places that they want to see as being “untouched”, like China and Iceland. Then Instagram is also having an influence – I’ll give you an example from Iceland. There was a waterfall that nobody went to, and now there are 30,000 people visiting it just one year later for one photo. Justin Bieber went to the waterfall and now everybody’s doing it.

What projects are you working on at the moment?
What I’m doing now is making a TV series on the healthiest people on Earth. This can be an 86-year-old person who is swimming from the United States to Cuba. Or a 96-year-old woman teaching yoga in Japan who still looks like a 60-year-old. We think ‘what are these people doing that other people are not doing?’ What do they have in common? Is it the food, their attitudes, their DNA? So we’ve put a team together and expect to start working on it soon.

What are you looking forward to at the MOVE Congress?
I’m looking forward to getting inspired, and to see or hear something that I’ve never heard before. I also hope with my speech that I can communicate some ideas and maybe spark some ideas to motivate people to make better solutions for tomorrow.

Related story: LazyTown star to kick off Day 2 of the MOVE Congress 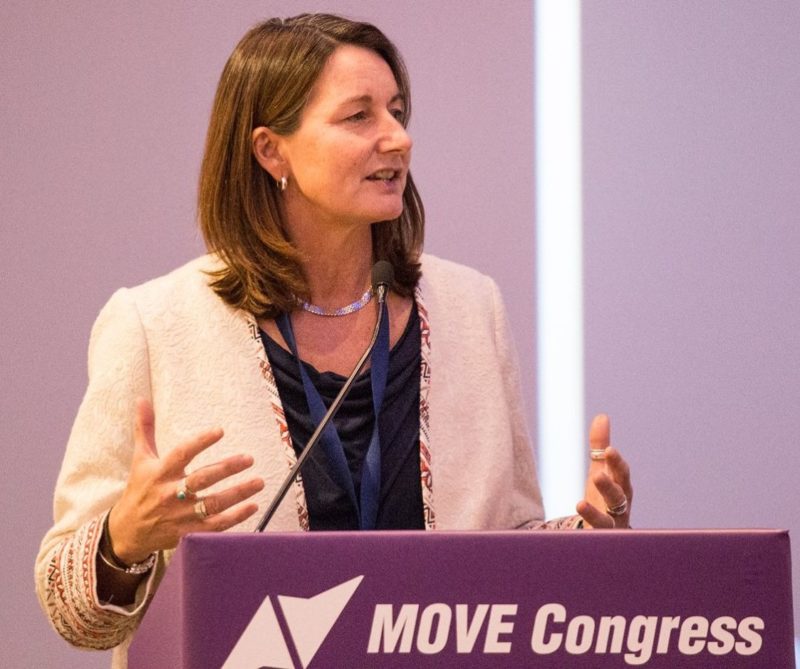 What we learn here can influence decision-makers back home

Interview with Youth Sport Trust Chief Executive Ali Oliver. “This movement represents everything that we believe in – the right of every child to move and the importance of that in their day-to-day lives.” When Youth Sport Trust Chief Executive Ali Oliver led our Active School Communities plenary session at the MOVE Congress 2017 in Birmingham, she underlined the importance of prioritising physical education and new, innovative ways of getting kids active at school and out of school hours. It is a