Game ON. The 9th MOVE Congress has opened in Budapest, where over 470 game-changers from around the world are gathering to share their secrets to getting more people active. And being the MOVE Congress, we don’t just talk the talk, we also walk the walk – or ride or jump, as the presidents of the host organisations did as they entered the Budapest Congress Center stage in style. 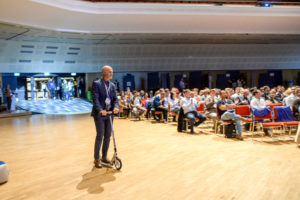 ISCA president Mogens Kirkeby and the Hungarian Student, University and Leisure Sports Federation president Gábor Balogh surprised the audience by arriving at the Pátria auditorium by scooter. Because this is no ordinary conference. And because, as physical activity promoters, that’s how they roll…

“Mogens are you ready to MOVE? Let’s change the game,” Gábor urged on his fellow president with another challenge on the stage, this time a skipping rope.

“Do you want me to do rope skipping in front of all these people?” After a couple of shaky jumps, Mogens called for some help. 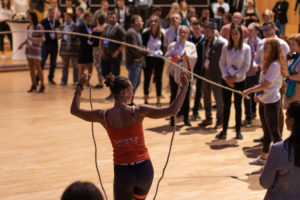 Help arrived in the form of no other than skipping world champion Adrienn Bánhegyi, who tours the world with renowned productions such as Cirque de Soleil. That was the first taste of an interactive skipping workshop that got all of the auditorium up and jumping, including our keynote speakers! 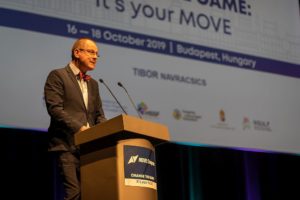 The next official speaker, European Commissioner for Education, Culture, Youth and Sport Tibor Navracsics entered the stage to open the Congress and underline the motivation that everyone in the room shares.

“How can I deliver an opening speech after a performance like that?” he joked before reminding us that the movement in the room was an exception to the norm, where 2 in 5 Europeans are still “sitting more and moving less”.

“It’s time to mainstream good practices,” he said, noting that the EU has proposed to double its budget for sport, including grassroots sport actions, to a total of €550 million after 2020. “Events like the MOVE Congress are important, where people are joining forces and exchanging ideas and moving people.”

He also touched upon a main theme of the first full day of the Congress tomorrow, the track ‘Connecting physical activity and health’ which will be moderated by Fiona Bull from the World Health Organisation.

“Why not have doctors prescribe physical activity?”

We will find out more perspectives on this question in a panel debate dedicated to the topic on 17 October. 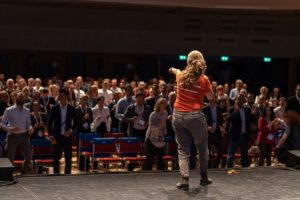 A brand new feature of the MOVE Congress this year is Innovation Alley, which was launched with a customised GoPlay game “We Will MOVE You” led by DGI Greater Copenhagen’s Britt Blum. 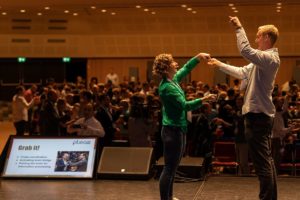 Her interactive presentation was followed by another demonstration the brought the participants to their feet again, Plug n Play by Pernille Feld Snitkjær from LetLeg (Pleaz) in Denmark. Innovative technology for visually impaired runners WAIBRObelt was presented by Katerina Sedlackova from WAIBROsports in Austria, and Community Made2Move by Fiona Chambers from University College Cork in Ireland.

Live streaming
You can follow the plenary presentations and ‘Game-changers connecting physical activity and health’ track tomorrow from 9am CET on the following channels: 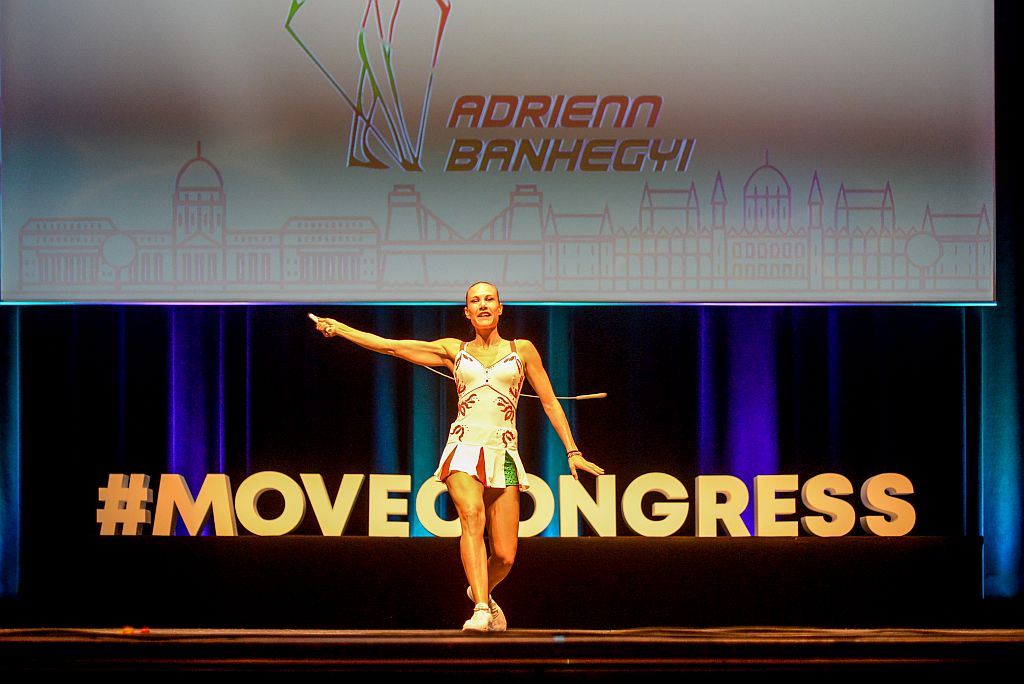 Game ON. The 9th MOVE Congress has opened in Budapest, where over 470 game-changers from around the world are gathering to share their secrets to getting more people active. And being the MOVE Congress, we don’t just talk the talk, we also walk the walk – or ride or jump, as the presidents of the host organisations did as they entered the Budapest Congress Center stage in style. ISCA president Mogens Kirkeby and the Hungarian Student, University and Leisure Sports Federation

Rolling into the MOVE Congress 2019

Can you imagine two organisations’ presidents rolling on scooters into an international conference? This was the official opening of the MOVE Congress 2019 on 16 October when the hosts Mogens Kirkeby, president of the International Sport and Culture Association, and Gabor Balogh, president of the Hungarian National Student, University and Leisure Sports Federation, appeared on the stage of the Budapest Congress Center to welcome the attendees. The MOVE Congress 2019 is one of the biggest conferences in the world that unites 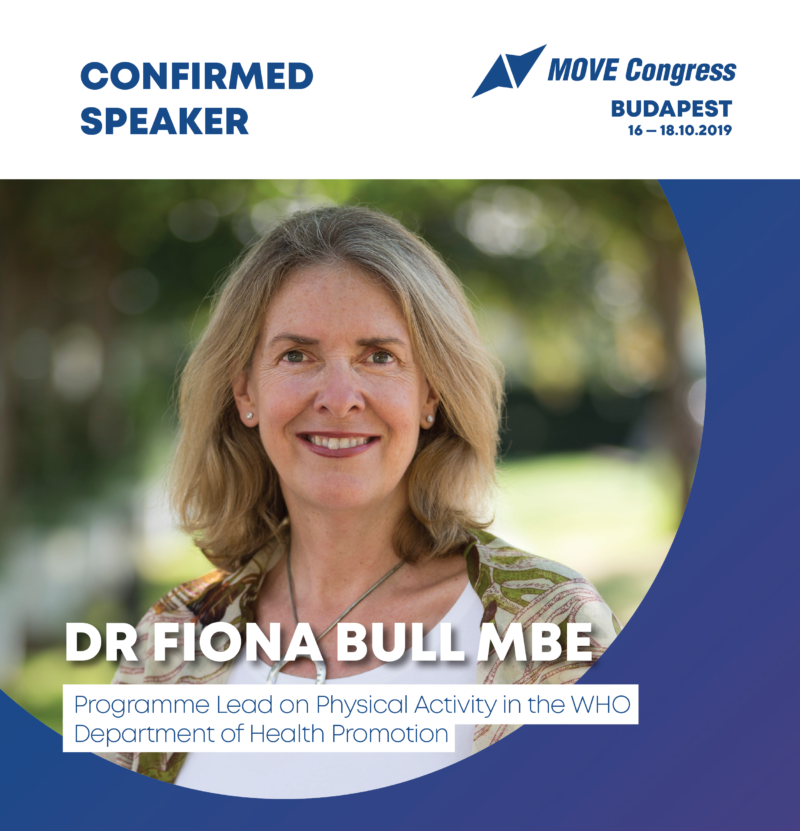 2 months to go – don’t miss our strongest speaker line-up yet!

With 2 months to go until the MOVE Congress in Budapest, ISCA is delighted to announce that Dr Fiona Bull MBE, from the World Health Organization, will be our first keynote speaker on 17 October and set the scene for one of our strongest conference programmes yet. Following the keynote session, featuring gamification experts Markos Aristides Kern and Rocket Beans TV active storyteller Gino Singh, Dr Bull will lead Track 1 of the MOVE Congress ‘Game-changers connecting physical activity and health’. Kate 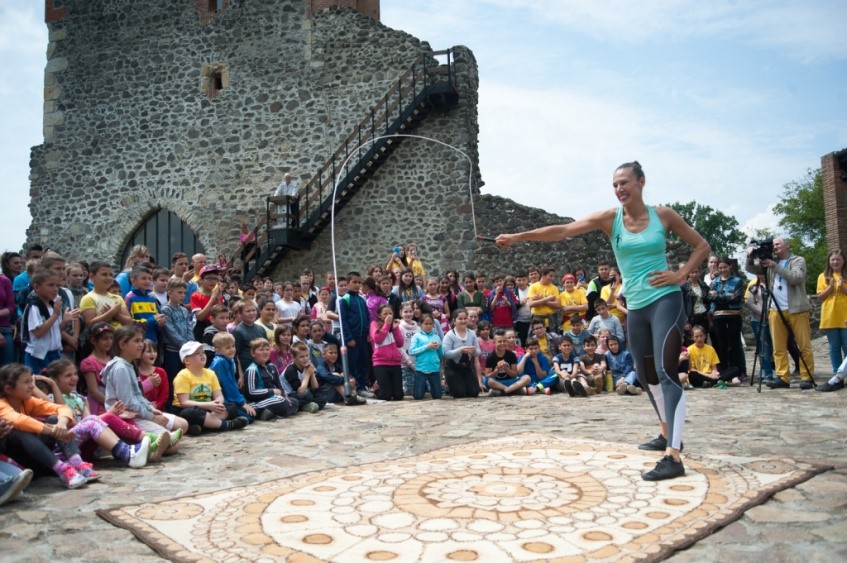 With a little over four months to go until the 9th MOVE Congress, we are excited to announce that the programme is taking shape and 21 speakers are now confirmed to join us in Budapest from 16-18 October 2019. Commissioner, Vice Mayor and World Champion headline opening Budapest is the European Capital of Sport in 2019, and will be featured at the MOVE Congress opening by Deputy Mayor Alexandra Szalay-Bobrovniczky, who will officially welcome the delegates to the Hungarian capital. European Commissioner 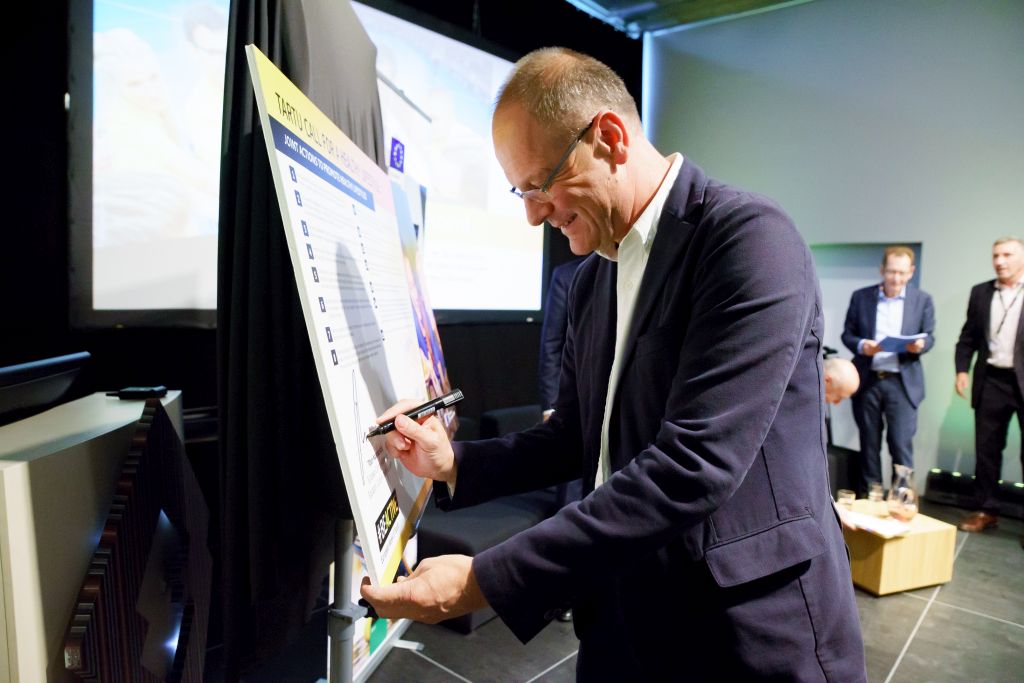 European Commissioner for Education, Culture, Youth and Sport Tibor Navracsics is the latest confirmed speaker for this year’s MOVE Congress. Commissioner Navracsics will speak at the opening of the Congress on Wednesday 16 October in the Pátria Hall of the Budapest Congress Centre. Congress participants can expect to hear how the Commissioner sees the way ahead for the grassroots sport and physical activity sector in Europe after the next College of Commissioners is appointed towards the end of the year. As a