Rolling into the MOVE Congress 2019

Can you imagine two organisations’ presidents rolling on scooters into an international conference? This was the official opening of the MOVE Congress 2019 on 16 October when the hosts Mogens Kirkeby, president of the International Sport and Culture Association, and Gabor Balogh, president of the Hungarian National Student, University and Leisure Sports Federation, appeared on the stage of the Budapest Congress Center to welcome the attendees. 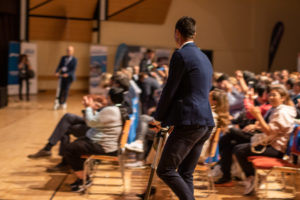 The MOVE Congress 2019 is one of the biggest conferences in the world that unites grassroots sports leaders from all over the world. With 477 participants from 64 different countries and 232 different organisations, this is a true celebration of MOVEment. This was also pointed out by Tibor Navracsics, European Commissioner for Education, Culture, Youth and Sport, present at the opening ceremony where he held a welcoming speech. 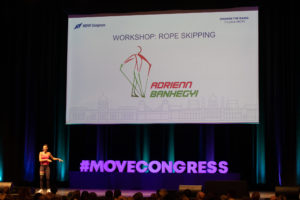 The attendees were treated with a spectacular performance of the skipping world champion Adrienn Banhegyi as well as Innovation Alley presentations. The “We Will MOVE You” exercise from Britt Blum representing DGI Greater Copenhagen was one of the highlights.

The MOVE Congress is not an ordinary conference. You will not feel the lack of MOVEment here. The rope skipping workshop lead by Adrienn Banhegyi set the bar very high for the rest of the event.
More to come in the following two days.