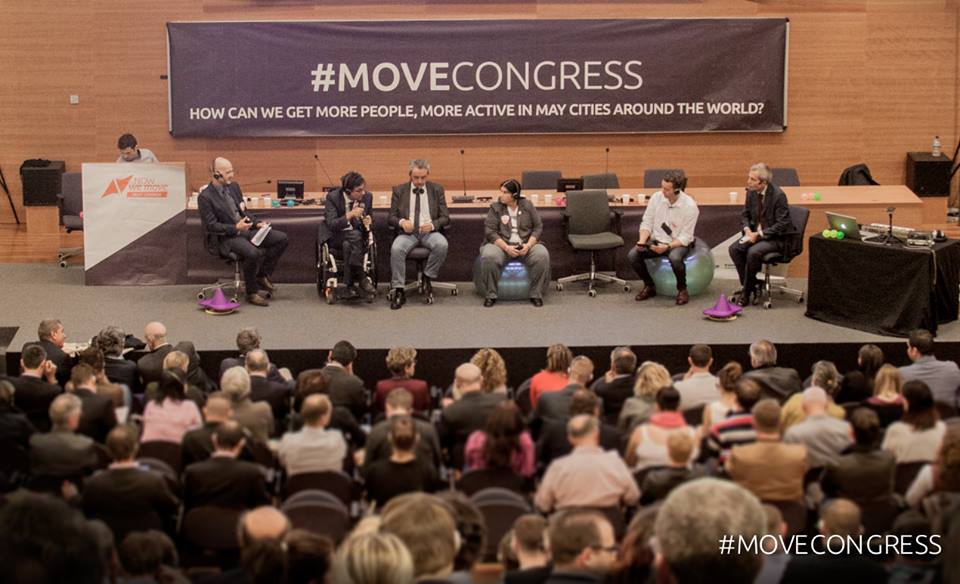 The MOVE Congress 2014 opened on 22 October at the Roma Tre University campus, a venue that can tell its own story about being rethought and reshaped over 12 years from being an old slaughterhouse to a new, vibrant university.

In the new Aula Magna auditorium, the Director of Roma Tre University’s architecture department, Elisabetta Pallottino, joined Giovanni Panebianco from the Italian Presidency of the Council of the European Union, Luca Pancalli, the President of the Italian Paralympic Committee, Dr. Jayne Greenberg from the US President’s Council on Fitness, Sports and Nutrition, and UISP and ISCA’s Presidents Vincenzo Manco and Mogens Kirkeby to discuss the importance of active cities at a talk show hosted by MOVE Congress convenor Sean Blair.

Panebianco said that the Italian Presidency was happy to have the MOVE Congress under its patronage alongside other events promoting sport and physical activity, including a recent meeting of EU sport ministers.

“We share the objectives of this Congress. We want to support them during the Italian Presidency of the Council of the European Union and in the future,” he said.

Pancalli, who is also a sport manager and an assessor for sport and quality of life for Roma Capitale, said the MOVE Congress was a perfect match for Rome’s growing recognition of health enhancing physical activity as something that should be promoted and facilitated.

“This is the first time in history that Rome has decided to see sport and citizens’ quality of life as a priority. Why? Because one child out of three has a life expectancy of 100 years. So the question is not only to promote policies that encourage sport, but also to promote sport and physical activity as a way to enhance citizens’ quality of life.”

Rome-based UISP President Manco also emphasised the need to prioritise active spaces and make urban sports facilities more open and inviting for citizens to use them.

To create open and active cities takes cross-sector commitment and brainstorming to enable new ideas to flourish, Kirkeby and Greenberg said. If 60% of the world’s citizens are living in cities by 2030, as Kirkeby pointed out, then the challenge to work physical activity into these citizens’ everyday lives is one shared by millions around the world, as Greenberg underlined:

“We all have the same global issues and want to find the same global solutions. Together we can close the circle for sport and physical activity so we can move the world,” she said.

Over the next two days, 330 stakeholders in sport and physical activity from around the world will be doing just that at the MOVE Congress 2014.