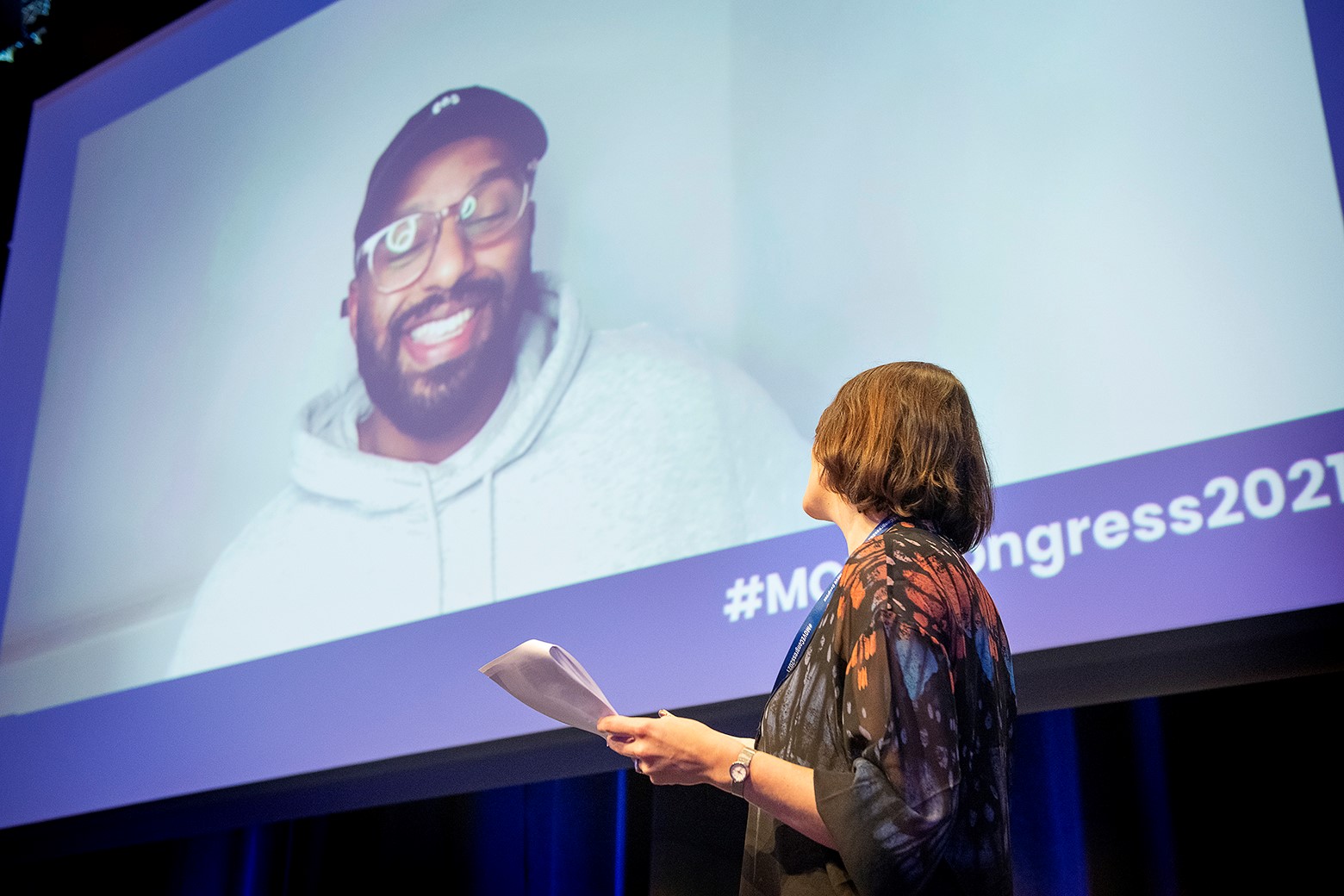 Magid Magid: “My story is inspiring, but what does it inspire you to do?”

“Let us make a promise not to denigrate but inspire. Rather than bemoan the present, paint a picture of what could be. And instead of inciting hatred and instilling fear, rise above the chorus of our age and dare to sing a different song.”

Magid Magid is a Somali-British activist and author, founder of the Union of Justice, former Lord Mayor of Sheffield and former Member of the European Parliament who broke into leadership roles in British and European politics and the NGO sector after having escaped from civil war in Somalia to the UK as a refugee as a five-year-old.

Although he was prevented from attending the MOVE Congress in person, he joined the auditorium online on 18 November to share his journey, determination and lessons (including the key message above) he wants to share to build the courage of the people he meets to dare to challenge the status quo and find a better path.

“I guess we’re all on some sort of journey. For some of us, that journey is physical and, in my opinion, it’s these kinds of journeys that really shape who we are as people.”

Magid arrived in the northern UK city of Sheffield as a child from Ethiopia and discovered as he grew up how open and nurturing the city was.

“Sheffield is also the first city of sanctuary in the UK,” he points out. “It’s got a long and rich history of welcoming people from across the world, so it’s very fitting that I actually ended up in Sheffield.”

This ethos became the driving force behind Magid’s venture into politics.

“Anyone who lives in Sheffield has probably had a heart-warming conversation in the queue for the bus,” he notes. “Strangers really matter in Sheffield, because sooner or later it becomes clear that there really aren’t any… This idea at its core, at its most simple is what helped me to discover the burning passion to fight in justice.”

Despite Sheffield’s inherent community spirit, Magid still saw stark consequences of inequality around him that he wanted to challenge as high up as he could.

“One of the things that made me want to stand for office, firstly as an elective councillor and then as the Mayor of Sheffield was, like many people who get involved in politics, I was tired of complaining, I was tired of asking the wrong people to do the right thing, but also I wanted to do something to combat all the rhetoric of hate fear and division that I was really witnessing.”

Dreaming globally and acting locally was his strategy to achieve positive change and help write “a more hopeful, inclusive story for the UK” amid Brexit and national political turmoil.

“With everything happening all over the world I thought that if I can at least make my small part of the world, my bit of Sheffield that bit better and make people’s lives a bit better, that’s at least me doing something. And I think it was with that passion that drove me and still kind of drives me today.”

Courage is contagious
Magid said he wanted to leave the audience with food for thought in the form of three lessons: courage, allowing for creature comforts (“cake is a coping mechanism”, as is recreation) and compassion.

He still believes “a wise and challenging hope” is still worthwhile during the current circumstances, which may actually be an important trigger for change.

“The global pandemic, the climate crisis and the fight against racism have exposed the deep inequality within our society and proven what people have been arguing for a long time that we’re only as secure as the most vulnerable among us,” he says.

“Hope is an emotional risk, but I do truly believe that hope transcends all our existence – in work, our personal lives and politics. It’s that underlying belief that a better world is not only possible, but it’s achievable and within reach.”

Thinking critically but positively is the secret to being courageous, he believes, and individual voices do count.

“Every time you choose to challenge the status quo and choose to do something differently, not only does that hope take a life of its own but I promise you that you will excite and empower all of those around you to also take a stand and make a difference… I always say, ‘What is tradition if it isn’t peer pressure from dead people?’”

No matter which aspect of community change is connected to our field of work – improved health, more active cities, safer spaces, inclusion and the many other angles to community sport and physical activity that emerged throughout this day of the MOVE Congress – maybe there is a better path and maybe we can take the first step along it.

“We have to seriously consider what is possible and be more ambitious and demand more.”

<MOVE Congress 2021/>
Restarting friendlier and by daring to go a