Drawing on plenty of experience in lobbying for the recreational and active transport cycling movement, Kevin Mayne from the European Cyclists’ Federation (ECF) said at the MOVE Congress 2017 that the undercurrent goal of their work is to change the reputation of lobbyists.

Advocacy has a higher, transformative purpose and not all lobbyists are advocating society’s vices, Mayne said.

The European Cyclists’ Federation has a central aim of changing the ways in which public spaces are used for transport. So in order to secure well-funded projects to support their work, their voice has to be clear and sound. Their goal for 2020 is to double the number of cyclists in Europe as well as reduce the number of killed or seriously injured cyclists by at least half.

At the MOVE Congress 2017, Mayne explained the ways to get into the middle of processes and guarantee your say in them. See the full presentation here: 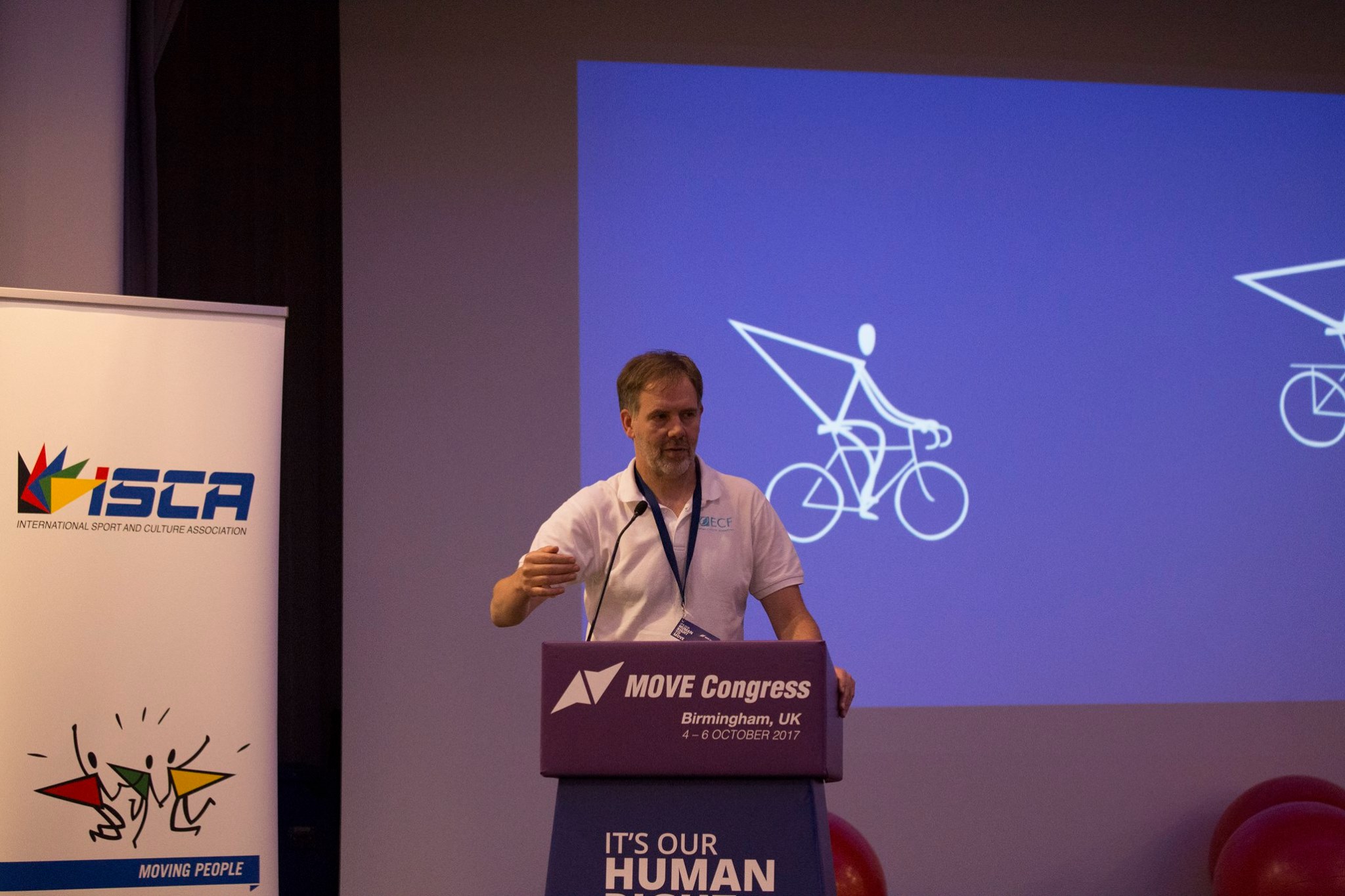 Drawing on plenty of experience in lobbying for the recreational and active transport cycling movement, Kevin Mayne from the European Cyclists’ Federation (ECF) said at the MOVE Congress 2017 that the undercurrent goal of their work is to change the reputation of lobbyists. Advocacy has a higher, transformative purpose and not all lobbyists are advocating society’s vices, Mayne said. The European Cyclists’ Federation has a central aim of changing the ways in which public spaces are used for transport. So in order

MOVING also means advocating for our cause

At the MOVE Congress 2017 closing session on Friday 6 October, ISCA Secretary General Jacob Schouenborg led an open panel discussion together with ISCA North America Chair Jayne Greenberg, Pauline Harper from EPODE International and Rose-Marie Repond from EUPEA on the WHO’s recent draft of a Global Action Plan for Physical Activity. So along with making physical moves to encourage others to get active, it is also important for the delegates to take political action and make strategic moves to get

The MOVE Congress 2017 in Birmingham, UK, from 4-6 October gathered stakeholders in grassroots sport and physical activity from six continents and countries as far and wide as New Zealand, Costa Rica, the US and Brazil. From transforming the Birmingham Council House’s Banqueting Hall into a 5Rhythms “ISCA Disco” at the opening session, to presentations that got the participants thinking and sharing their views, to more dancing with a Bhangra and barn dance workshop at the networking dinner – the 8th

“What a responsibility we have!”

The MOVE Congress 2017 puts the spotlight on us as enablers of the human right to MOVE.  The barriers that get in the way of the average citizen exercising their human right to move are plentiful, according to the presenters at this year’s MOVE Congress. Anything from money to gender-stereotyped activities, to lack of safety, to perception, to litter and lazy dog owners stops people from using their environment as a space to be active. “It’s easier to find the millions to

Video highlights from the opening of the MOVE Congress 2017

The MOVE Congress 2017 started with not one, but two dances! The Birmingham Council House was a grand backdrop to the unique blend of spontaneous 5Rhythms moves, opening speeches and an Indian bhangra dance finale. For a glimpse of the action, watch the video below. Missed the conference? Then stay tuned for the MOVE Congress 2019 - it may visit your city

MOVE Congress 2017 starts with a Call to MOVE

It’s our human right to move – so what’s stopping us? MOVE Congress 2017 facilitator Sean Blair from ProMeet greeted this year’s delegates when they arrived with a Call to MOVE. And before the opening speeches even began, Birmingham Council House’s banqueting hall had transformed into a dance floor led by Neil Pinnock from 5 Rhythms and six of his co-dancers. “I don’t think the city has seen an opening of a Congress like this”, Birmingham Councillor Ian Ward said

In general, we have a good understanding of who the hard-to-reach groups are and why it is important to get them engaged in the community. Although everyone has the fundamental right to move, many social groups are being left behind when it comes to access and awareness of affordable activities that can enhance their wellbeing. As a result, their physical activity levels tend to be much lower and it can be difficult to motivate them to be more active. What to do

If not now, then when? Don’t miss the MOVE Congress registration deadline!

Many sport-for-all promoters have already marked in their calendars three important dates – 4-6 October when MOVE Congress 2017 takes place. If you still haven’t reserved your ticket then the right moment is now – registration closes on Sunday 24 September. The full pass (250 euros) will guarantee you a ticket to one of the most dynamic conferences in the field. We will not just do the talking but stay active throughout the three days. The participants have a chance to