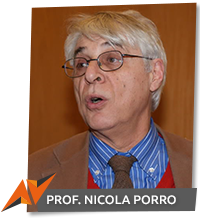 Interview with Professor Nicola Porro, Faculty of Sport Sciences, University of Cassino (Italy)
With 37 years’ experience as an academic in the field of sociology, Professor Nicola Porro from the University of Cassino’s Faculty of Sports Sciences can draw on a wealth of insights when he speaks at the session “Open City – Active City from a social perspective” on Day 2 of the MOVE Congress 2014. He will present 12 pieces of advice he believes could help citizens find their way past the limitations of urban spaces and make their cities more active.

ISCA presents a sneak preview of Professor Porro’s thoughts on involving citizens in creating their own active spaces, the importance of the Third Sector in strengthening initiatives for them and the sensitive status of the sport and physical activity sector in Italy.

Q1. What are your expectations for the MOVE Congress 2014?

I like the association it has established between the concepts of “open” and “active” cities. I expect that the Congress debate will develop this connection in two directions. The first concerns urban mobility as a relationship between people, cultures and lifestyles. The sport movement can perform an important function from this perspective. The second deals with environmental sustainability. The goal is returning to the citizens of the metropolis (and not only) the possibility of using urban spaces freed from the constraints imposed by increasingly intensive urbanisation and motorisation. Reappropriating the city really means, in my opinion, the expression of a new right of citizenship.

Q2. What are some of the barriers that cities have which inhibit physical activity, and how do you think they can be overcome?

We should not generalise. Cities, especially the European ones, have different social histories and urban configurations. Certainly, however, all of them have a need to realise mobility strategies in an environmentally sustainable way. This means removing architectural barriers (especially, but not only, those that inhibit the right to movement of the disabled), creating paths dedicated to walking and cycling, equipping and opening up green spaces for low-impact activities and, of course, drastically reducing the use of private cars.

Q3. What is the “Third Sector” and why is it valuable in promoting sport and physical activity to citizens?

The Third Sector is the area of ​​social economy which is not monopolised by the State or by the Market. The Third Sector promotes above all – even despite the recent economic crisis – higher social quality. This explains why the non-profit sports associations and the voluntary sector work together to promote physical activity to citizens, and their common links in the Third Sector constitute an extensive network throughout Europe and beyond. Our Congress should encourage and support this movement and highlight various organisations’ experiences in this field.

Q4. What can the Third Sector do to encourage different social groups (e.g. children, elderly) to become more physically active?

It must, above all, affirm and promote a culture of seeing the body as the cornerstone of individual and collective wellbeing. This is not a simple task. It means attending to different needs, from cultural development to training opportunities, whilst taking into account advice from professional researchers and practitioners. The Third Sector can effectively intervene where the school or the health care system find it difficult to offer an adequate supply of initiatives that are targeted to special needs. It can also be used strategically to draw on a repertoire of best practices aimed at specific social groups and replicate them in other contexts.

Q5. How has the sport for all culture changed in Italy over the last 15 years?

In Italy, for historical and cultural reasons, sport for all has traditionally been interpreted as ‘low cost’ support for competitive sport. Sports promotion was intended primarily to extend the perimeter of recruitment for high performance sports. It has only been since the 1990s that more attention has been given to the educational, social and health benefits of physical activity. It drew attention to creating activities that are suitable for everyone and this has led to the first steps being taken to establish a system of sports associations promoting a new ‘body-focused’ approach to citizenship. This, however, has been a controversial route. Conservative governments such as the Berlusconi-led government returned to power only to deal with the big sports. Those who were more attentive to the social dimension had to deal with drastic cuts to public resources, which from 2011 has mainly affected local authorities who are oriented towards promoting sport as a right of citizenship. So it is not an exaggeration to say that the sport and physical activity sector still represents a politically sensitive