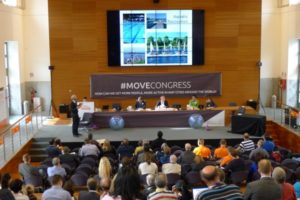 The moderator of the parallel session 1 on Thursday of the MOVE Congress 2014, René Kural, from the Royal Danish Academy of Fine Arts, introduced the topic of urban planning with a humorous twist.

He went on to invite urban designer, planner and researcher from Centro de Estudos de Arquitectura e Urbanismo at Faculdade de Arquitectura da Universidade do Porto, Daniel Casas Valle, to the stage, who talked about the topic ’Sport in the city’.

He went through how our lifestyle has changed a lot in the past decades:

“We sit down at work a lot,” he said before addressing what could be done to change this. One of the most important things is the public space:

“It matters! As meeting places, for exercising and recreation. Some sports have space demanding requirements like football pitches and need large areas. Other sports can practically take place everywhere,” Daniel Casas Valle explained.

One of the really good ways to develop great public spaces is to make sporting facilities at schools more open because they can be used for several target groups – on schooldays by pupils and at the weekends by the public.

Next up was Seattle Parks and Recreation’s David Graves with a presentation on how to be a good neighbour to your neighbourhood parks. First he told the audience about his home city, which is surrounded by water. Ten percent of the city is comprised of parks, there are 100+ miles of trails and every resident has access to an open space within each quarter mile.

One of the plans to create more recreational urban areas is to turn water reservoirs into public parks and hold more events like Big Day of Play and other great opportunities for people that the city does not typically connect with.

“To conclude, it’s about thinking differently and providing opportunities for the public,” Graves said before handing the microphone to the next speaker.

Member of Italian Parliament Laura Coccia’s agenda revolves around sport and accessibility in Italy. A lot of disabled people have poor conditions all over the country as well as others with different limitations.

“Football Stadiums are the most attended sports places in Italy. They are not equipped to host disabled persons. The same goes for parents with carriages who have difficulties in getting into, for example, parks because of stairs and steps,” she said, explaining that it is crucial to develop recreational spaces and that it is something for the government and local authorities to change.

And it is not only facilities that are an issue. Laura Coccia wants more attention to be paid to physical education and concluded: “Schools should not only be about teaching in curriculum but in movement and physical activity as well.”

The session ended with Luca Rizzo Nervo from the Ministry of Sport, Comune di Bologna. He shared his experiences on economic factors in urban sports facility planning. Initially Nervo presented plans for new high-concentration pedestrian areas in Bologna and a two-way bike path forming a ring around the city centre.

Afterwards he presented various projects in the city:

The session concluded with Nervo telling about Bologna’s iPhone app created for walking routes in the urban areas of the city that is actually fulfilling the recommendations of the WHO in terms of physical activity. Lastly he played a video presenting the app.